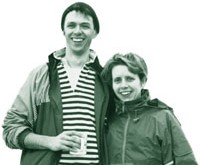 We must be mad!! That's what a few of our friends said to us when Yvonne and I decided that we should start a rowing club in Milton Keynes. Looking back, maybe we were but it seemed like a good idea at the time and with hindsight we are glad that we did it.

So how did we come to the conclusion that Milton Keynes could and should have a rowing club?


Yvonne and I met at Northampton RC in September 1993 and after getting married in 1994 and moving to Woburn Sands we found that traveling to and from Northampton was becoming more awkward. We soon realised that if we wanted to continue with a sport that we both enjoyed, we would have to find an alternative venue, the other local clubs being in Bedford which is just as far away.

In the summer of 1995 we started to look for a suitable stretch of water for rowing. We contacted the MK Council, NCT, MK District Sports Council and the ARA and visited MK's three main lakes at Caldecotte, Furzton and Willen. Caldecotte surfaced as the favourite, given that it had been designed for rowing by Mr John Buchan (ARA "big wig" and really helpful chap) many years before when Milton Keynes was a SimCity game file on a town planners PC.

When we visited the lake we found that it was actually being leased by De Montford University from MK Parks Trust and was already being used by MK Sailing Club and MK Canoe Club. These three organisations had formed an association to manage the use of the available facilities so, if MKRC was ever going to exist, we would have to be a part of the Caldecotte Watersports Association (CWA).

Having identified a venue and spoken to various supporting bodies we now had to find some rowers. A letter in the MK Citizen in early September '95 suggested that anyone interested should meet us in the Caldecotte Arms on the north side of the lake to discuss the possibility of starting a club. We didn't really have any idea of what it would entail but we needed to see if there was any one out there willing to help. We were very pleasantly surprised when about ten people showed up and we resolved there and then to make it happen.

During our weekly meetings we elected club officers for the first year, applied to the ARA for affiliation, established club colours, adopted a constitution and established water access through membership of the CWA . We decided from the outset that we would never turn anyone away and that we would make every effort to be the friendliest club around. At first we struggled to compete with the more established clubs, but with the help of some really good coaching from various people we eventually won our first pot at the 1996 St Neots Head Men's N4+. We got our first regatta pot at the 1997 Cambridge Autumn Regatta again at Men's N4+ which was a surprise because we were actually training for the Boston Marathon! MKRC have had other successes in pairs & singles and have competed regularly throughout the region including an entry in every Boston Marathon bar one since our inception.

Having had a lot of help from various people directly & indirectly, we are especially grateful to the rowing clubs around the country who donated boats for our use, either as gifts or permanent loans.

Since we began we estimate that over a hundred people have been members of, or involved with the club in one way or another and we'd like to thank each one of them for their contribution. We're proud to have started something that will, hopefully last a very long time indeed and we look forward to helping the club go from strength to strength in the coming years.

If anyone reading this would like to get involved, especially if you were in the past, please don't hesitate to contact us via the e-mail button on this website, I'm sure you'll get a warm welcome.