Milton Keynes Rowing Club has seen an unprecedented increase in its membership since the London Olympics 2012 and with some pretty legendary fundraising ventures such as a record breaking Cross Channel Row, along with support from MK Hockey Foundation, we have been able to buy a fleet of eight new boats. The boats, which are suitable for learner and development rowers were named at the weekend in a naming ceremony held at the picturesque location of the Watersports Centre at Caldecotte Lake. The theme of the names is one which is close to the hearts of all those who live or have connections with Milton Keynes and includes the names associated with the famous codebreakers of Bletchley Park.

First to be named was Enigma, followed by Lorenz, Colossus, Codebreakers, Station X, The Bombe and of course, Alan Turing. Members were delighted with the choice of names as everyone in Milton Keynes is familiar with the story of Alan Turing and the codebreakers.

Louise Rivett, Club Chair said ‘Our Club, which was awarded ‘Club of the Year’ this year by Sport MK, has grown in popularity year on year and our racing crews are a familiar sight at events across the region and nationally, as we gain credibility and respect. It seems fitting to start a new theme for our boats which shows people that we are proud of our identity and that Milton Keynes may be a new town, but we have some fascinating history of our own. I would like to thank the MK Hockey Foundation for supporting us and enabling us to buy these boats, which will allow more people to enjoy learning the sport of rowing that we are so passionate about.’

The last boat to be named was a double scull called ‘Liz Tatman’, named after Dr Liz Tatman who was Chair of the Club until last year, in recognition of her enormous contribution to the development of the Club. Liz, who rowed for GB as a junior, was delighted that her work had been recognised and that the Club is continuing to grow successfully. 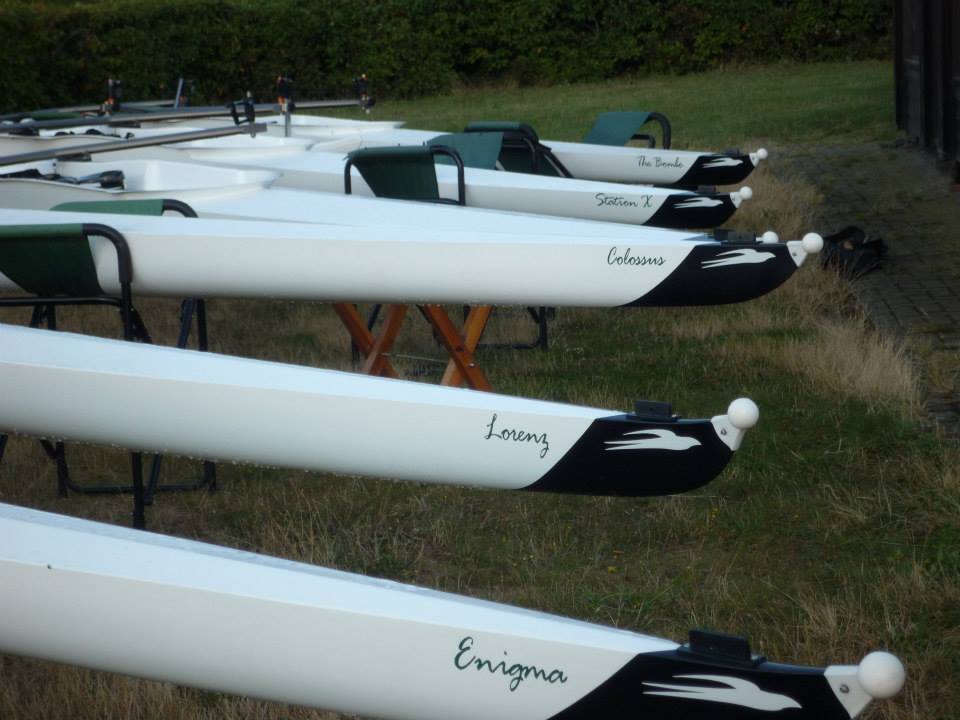 As the sun set over Caldecotte Lake, the sight of the eight new boats lined up with their names displayed proudly was impressive. The Club is now looking towards its next event which is our own Regatta on 19th September, where the boats will be seen racing on the lake. All are welcome to come and watch the racing throughout the day and to see the boats in action.

MiltonKeynesRC @MiltonKeynesRC
Brilliant race from the Women's eight, winning their category and the fastest Women's crew of the day https://t.co/SUuCVy9fn3

MiltonKeynesRC @MiltonKeynesRC
@Rowingfamily1 Yep. Full frogman outfit. Fortunately the keys were dropped at the edge of the lake. Was quite amusing watching this though